Just Ask Kevin: "What is the most successful time for an annual appeal?" 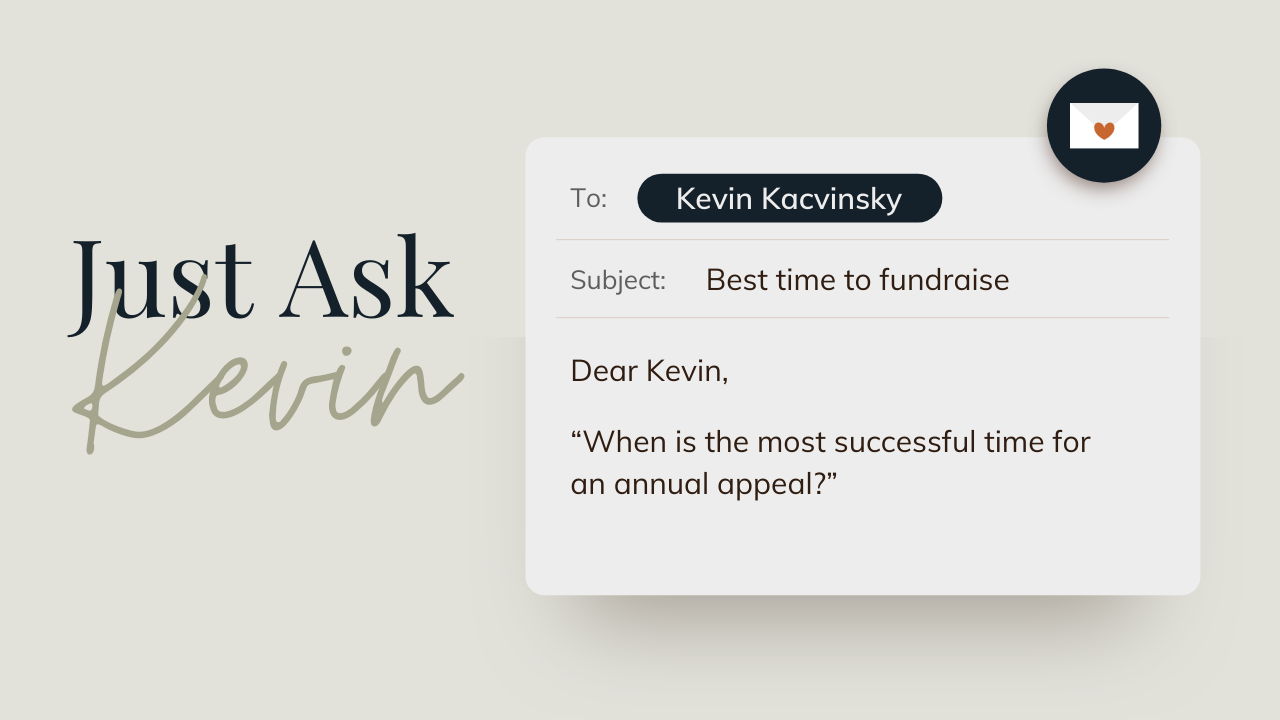 Ask Kevin: “When is the most successful time for an annual appeal?”

In this series, I answer questions from my audience. To submit a question, email me at: [email protected]. You will get a prompt response, and in some cases, I will also eventually outline a more in-depth response on my blog.

When is the most successful time for an annual appeal?

If you want to know the best time of year to solicit gifts, that’s going to be December. According to Nonprofit Source, as of 2018, 30% of annual giving occurs in December; 10% of all giving takes place in the last three days of the year.

If you are not doing an appeal in December, you are leaving money on the table. Don’t fall into the trap of thinking that “everyone else is doing it in December, I’ll do our appeal in February instead.” There will not be more money available to you in February. Giving at year-end is cultural. The holiday season makes people more likely to give and so do the tax benefits of giving before the end of the calendar year. You may (an probably should) choose to have appeals at other times of the year, but don’t miss out on this last quarter.

With all the competition for donor’s attention and money, how will you stand out and raise more money? You are going to do it better than everyone else! If we remember the Ask-to-Touchpoint Ratio™ - we would begin your appeal in October to get results in December. In nearly all appeals I’ve done, the calendar year-end appeal is announced in October, the appeal letter is received by the donor in early to mid-November, and then there are a series of reminders, touchpoints, and holiday-related communications culminating in a final reminder in the last three days of the year. There is a lot of work to make this happen during an already busy time of year, but the results are worth it. To donors see a healthy balance between hard and soft asks plus non-ask touchpoints without being overwhelmed with communications.

What is an Annual Appeal and Annual Fund?

You asked specifically about “Annual Appeals.” The definition of “annual appeal” changes from one organization and one fundraising professional to another. Traditionally, organizations would have an “annual fund” - the catch-all which we usually call “unrestricted giving” or “general giving.” A benefit of having an annual fund is that you can measure that specific giving from one year to the next, segment donors by this type of giving, etc. Many organizations have a particular development staff member dedicated to running and managing the annual fund and its donors.

One great practice that has emerged from annual funds is outlining where the money would be spent that year (and ideally the impact). This practice is beneficial in making the money that is considered by the nonprofit as “general” or “unrestricted” easier to understand for the donor. For example, You are no longer are you raising money for “salaries,” you are focusing your efforts this year on “recruiting 200 seminarians.”

If we understand “annual fund” in this way, then the “annual appeal” would be one or a series of appeals throughout the year to raise money for the annual fund. Typically, since the annual fund is so broad, a donor could give to the fund (which was basically unrestricted) but may also restrict their gift to one of the projects within the fund (the “building project,” for example). Villanova, my alma mater, has their annual fund each year, and I usually designate my gift for the “Center for Church Management,” which is the specific program from my Master’s degree.

In my experience, and thus in my advice, setting-up a fund and explaining the overall plan to donors is too complicated for smaller organizations these days. With the advent of online giving, email soliciting, social media, etc. the more complex and planned annual fund has, in my opinion, become less popular outside of large institutions like colleges, universities, dioceses, etc. Instead of an annual appeal that raises money for the annual fund, it’s more usual for small to mid-sized organizations (under $5million in annual revenue) to simply have multiple appeals each year. At least one of these appeals should be broad, far-reaching, and going to everyone in the nonprofit’s database. Therefore, my definition of “annual appeal” is a specific broad-reaching campaign that every contact in the entire database receives at least once per year for the mission advancement of the organization.

A school, for example, will usually have an appeal around graduation (May/June). That’s the end of their “fiscal year,” but the middle of the calendar year. It makes sense for them to do a push that time each year with happy alumni, happy parents, and grandparents, more people on campus, stories of success, etc. It also makes sense for a school to have an appeal at calendar year-end since it’s the end of a semester and the biggest time of giving. However, maybe those are not the “annual appeal”. For a school, the annual appeal may be “back to school” in August and September. If you’re a school you should be sending out this type of appeal now! Which appeal the organizations consider their “annual appeal” or whether they are all to benefit one “annual fund” is really an internal discussion. 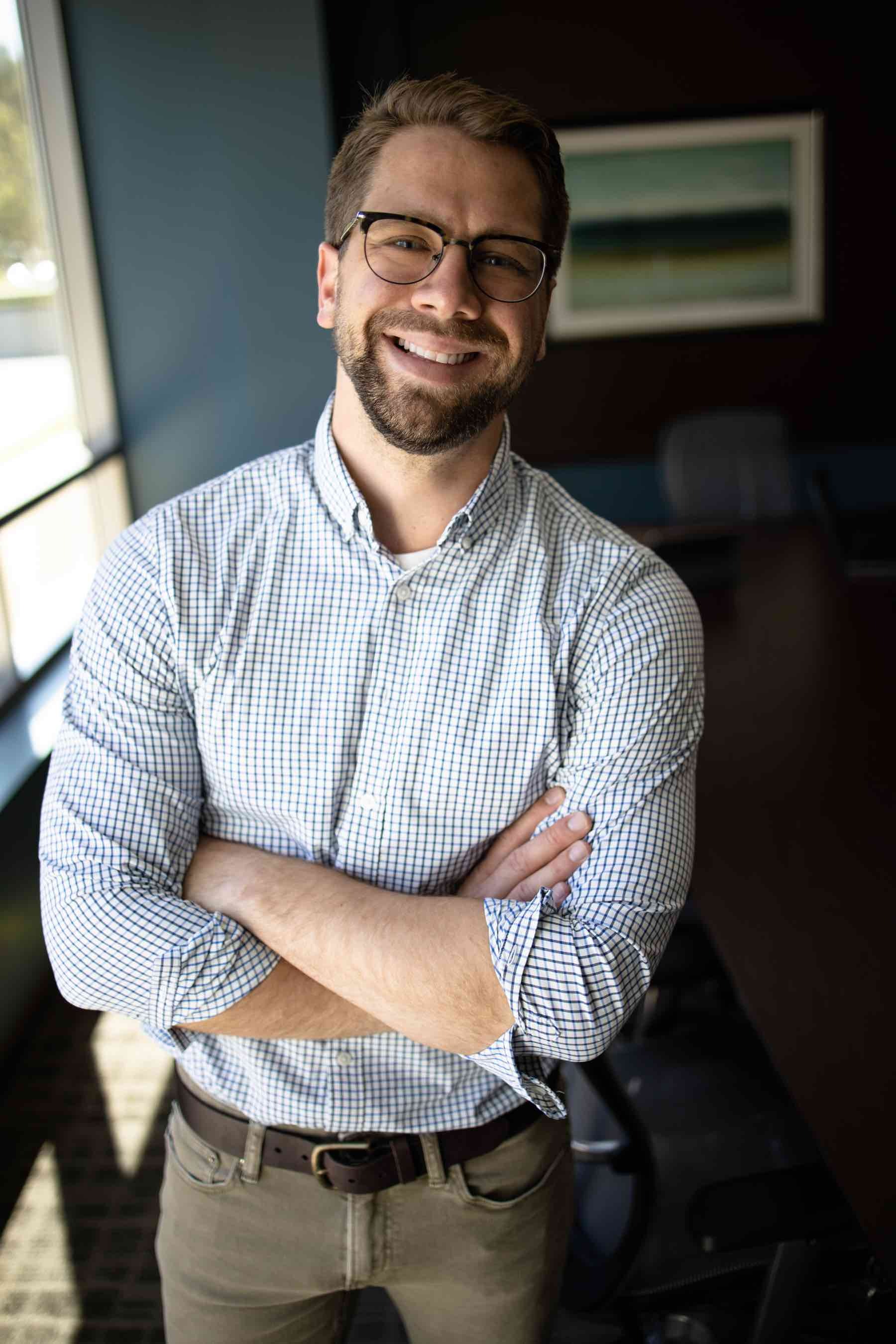 I am a peer, not a consultant. I have a wide array of experience from start-ups and guerrilla marketing to complex organizations, large universities, and dioceses -- and everything in between. I specialize in helping small to mid-size organizations under $5million per year in annual revenue craft their message and then use processes and technology to build their audience and raise more money.

Email is the #1 way I communicate. Enter your email address and you will be the first to know what I'm working on - before it's on social media or my blog.

I will send you no more than 2 emails per month.

Join Now To Access Our Exclusive
Newsletter for Nonprofit Professionals!